Tamaki College Ex Students Star at Christmas in the Park...

This article is from the Eastern Bays Courier....
Click here to see the original article online.


Big Talent in the park 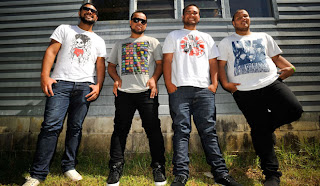 HIGHLIGHT PERFORMANCE The Talent
is performing at Christmas in the Park on
Saturday night. From left: Paula Fakalata,
Bruce Baiabe, Sakalia Vaetolo and
Tony O'Rourke.
ORGANISERS of Christmas in The Park weren't looking for groups to perform at tomorrow's event –
until they met The Talent.
Four young singing sensations formed the group after bonding over music while at Tamaki College.
They've performed to schools throughout the country, to 3000 people in Tonga and to former
Prime Minister Helen Clark.
Tomorrow they'll sing to their biggest audience of about 100,000 people at the Auckland Domain.
Tony O'Rourke says their pastor told them about the auditions earlier this year.
"They actually said no at first," the 21-year-old says. "I just emailed them back and said:
`I think you'll benefit from us singing'."
The organisers weren't looking for groups at that stage but invited The Talent to audition anyway.
"They didn't ask us for a callback or anything. They just said: `That's it, you're in'."
Tony met Sakalia Vaetolo, 21, Bruce Baiabe, 22, and Paula Fakalata, 19, when they were part of
the high school choir.
They all sang different parts so decided to see how they sounded as a quartet.
"We're good individually but we're much better when we're all together," Bruce says.
The group performs popular songs and old-school favourites like The Temptations' My Girl
and The Beach Boys' Barbara Ann.
When they first started they roped in a couple more mates and formed the band Island Emo,
which came second at the Smokefree Pacifica Beats competition. They then formed The Disciples
before the new name took over.
The group often visits schools around the country as part of The Revolution Tour, which is
organised by Equippers Church.
Members hope to fully dedicate themselves to touring next year and "taking a positive message
wherever we go".
Music was the first thing all four bonded over. Religion was the second.
They credit part of their success to Panmure couple Paula and Tania Finepolo.
The boys met them a few years ago and moved in with them shortly after.
The couple had been living in a flat in the CBD but moved to Panmure so the boys could be closer
to school.
All of them lived with the Finepolos at one stage, because of family circumstances and a desire to
live together.
"They took us in and kept us off the streets, away from parties and getting into all that stuff," Tony says.
"They helped build discipline in us."
The Talent members also say their families, friends and church played an integral role in shaping them.
"If it wasn't for them I wouldn't be doing what I'm doing now," Bruce says.
Other east and bays residents performing at Christmas in the Park from 7.30pm tomorrow include
Remuera singer Edward Laurenson, 16-year-old Glendowie resident Stephanie Field and
Paddy Leishman, a 17-year-old Mission Bay singer/actor.
MICHELLE COOKE - East And Bays Courier
Posted by Tamaki College at 8:22 AM