Unsung Heroes: Boots and all go into rugby coaching

The following article is from the New Zealand Herald.
Written by James Ihaka.
Click here to see the original article.

A team of budding rugby players from a decile 1 Auckland school literally have big shoes to fill after their heroes - the Blues rugby team - donated them their boots and gear.

The Tamaki College 2nd XV is now 18 pairs of new and near-new rugby boots better off after Blues players stepped in to help.

The boys' coach, Jamie Hodgetts, who got involved last year after being told the school needed a few more helpers, is among a group of people being recognised in the Herald's Unsung Heroes series for their voluntary work in the community. Five nominees will be chosen to go on a P&O cruise.

The 29-year-old marketing manager does everything from getting the boys to and from games, organising sponsorship and providing counsel to making sure his team from the Glen Innes school have all they need - including boots.

Blues communications manager Jo Coleman told the Weekend Herald she was touched by Mr Hodgetts' story and his efforts to help those in need.

She received a phone call from Mr Hodgetts' girlfriend, who asked her about the possibility of the team donating some of their gear to help the youngsters.

"It was the end of the season and good timing and we thought, 'Here's a guy who has stepped up and has done something good for the community, and what a good way to add on that'."

After discussions with team management and the players themselves, she got back to Mr Hodgetts' girlfriend and said: "I just hope you have boys with big feet in your team."

All Blacks Keven Mealamu and Jerome Kaino and teammates Joe Rokocoko, Charlie Faumuina and Peter Saili were on hand to donate their gear at Unitec yesterday to two boys from the team.

"They were a bit shy and quiet but we are happy the boots and gear have gone to young boys who trulyneed them," said Ms Coleman.

The kind gesture has sparked a new tradition with the Blues, who will now nominate a team or club to donate their boots and gear to at the end of each Super rugby season.

Mr Hodgetts said his young charges were in awe of the Blues players. "They were pretty rapt to see Joe Rokocoko, and when Keven Mealamu came in they were like, 'It's Keven Mealamu', and there were big handshakes."

He said the boys couldn't wait to show off their heroes' boots to their mates.

"It's quite scary the majority of these kids will fit these boots. I mean, one of the kids I coached was 14 and had size-15 feet! If they can't fit them they will go to the boys in the 1st XV or we will just give them to the school."
Posted by Tamaki College at 11:26 PM 5 comments: Links to this post

Tamaki College's very own Babylon Riddim were on I Am Tv this morning...
Check out the I Am Tv link to the show here...
Posted by Tamaki College at 5:53 PM No comments: Links to this post

The Enviro Group are making a big impact at Tamaki College. They have started their own blog and their first post is all about a recent competition they were involved in. Go and visit their blog to check it out...
Posted by Tamaki College at 3:33 PM 4 comments: Links to this post

There is a link down in the Tamaki College Department Blogs to a new blog that has been started in the English Department. To get you there quickly today, click here !!!
Posted by Tamaki College at 1:33 PM 1 comment: Links to this post

Tamaki College opening of the Barista
Friday 14 May the Year 13 Catering and Hospitality students held the official opening of the school's Art of Coffee Making. It has been some time now that the school has had the coffee machine but they decided with their teacher that they would hold a formal ceremony to open it in Term 2.

Having a machine like this at the school means an extra skill for the students to have especially if they are seeking part time jobs in local cafes. The morning started of with a word of prayer to bless the programme/machine by the schools kaumatua , Wally Noble and followed by the cutting of the ribbon by our principal, Mrs Pamaka.

The guests were then treated with freshly baked goods ranging from a variety of muffins and slices. This was accompanied by a freshly brewed cup of coffee, decided upon by the guests themselves. The celebrations did not end there as there was a lunch time special for the students, staff and other parties interested. All hot drinks served were at a special price of $1.00. There was a mad rush and everyone who bought one came back for seconds some even thirds.

The catering class would like to extend their sincere thanks to all distinguished guests who came to the official opening, the students and staff who supported us during our lunch time sale and last but not least our teacher, Mrs Heka.

Thank you once again and we look forward to your support in the near future.

Posted by Tamaki College at 5:33 PM 2 comments: Links to this post

Check out all the weekend sports action on the TCTV Sports Page...
Posted by Tamaki College at 10:37 AM No comments: Links to this post

A Fantastic Time at the Science Road Show... 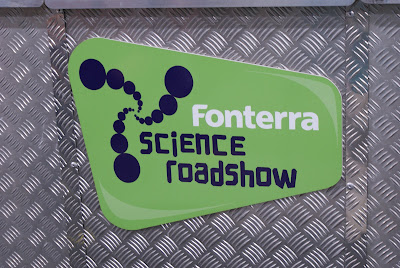 Come and check out the Science page for all the details about the Science Roadshow we have had in the auditorium over the last two days.
Posted by Tamaki College at 6:38 PM 1 comment: Links to this post

The Girls Rugby team had their first home match on Monday after school this week. Check out the highlights on the Sports Page.
Posted by Tamaki College at 6:10 PM No comments: Links to this post

Tamaki College had a great game on Saturday. Check out the sports page for details from Fred.
Posted by Tamaki College at 10:08 AM No comments: Links to this post